This week’s Diva Challenge was inspired from a letter Laura received from a 12 year old boy wishing to honor his gay friend on “National Coming Out Day.”  To read about the letter and challenge on  “The Diva’s Weekly Challenge.”

I look forward to a society and world that views people without judgement.  What would the world be like if we allowed people to be who they be?  Imagine what that would that would be?  What would it take for there to be a peaceful world?

I realize that there are some who do not embrace my point of view and they won’t change unless they chose to change. Sometimes what it takes is having a gay or lesbian friend and finding out that they are a really good person.

The tile shares the symbol for LGBT – a rainbow.  The left side includes those who have not yet embraced LGBT and after encountering a homosexual friend, realizes their friend’s contribution to enriching their lives. 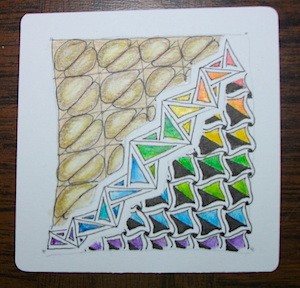 I thought it interesting that I was working on this tile at the same time that the Supreme Court ruled about gay marriage.  I am old enough to remember when blacks, in some states, had to sit at the back of the bus.  Now people of any race don’t worry about where they sit on a bus.  When seeing a mixed race couple was rare.  Now we see them in commercials. I envision a world of the future, hopefully in my lifetime, where who someone chooses to love and marry will not even register a blip in our consciousness.  When gay marriage will be as common and welcome as heterosexual marriage and no one will think anything about it.  What a wonderful world it will be when people can love whomever they want without worrying about being judged.  The world needs more love – no matter who we choose to love.  Here’s to my gay and lesbian friends!  National Coming Out Day – October 11, 2014.

Until next time,
Sending smiles,
Maureen

One Response to A More Peaceful World…

This site uses Akismet to reduce spam. Learn how your comment data is processed.

Sign up to get news, tips, and updates about Zentangle delivered to your inbox every two or three months.
Sign up for my newsletter
For Email Marketing you can trust.
Zentangle® Links